Unity supports a number of ‘Build Targets’, or platforms that it can create executable files for. Desktop software for Windows, Mac, and Linux - of course, but also mobile platforms like Android and iOS, WebGL targets for playing games in the web browser on sites like itch.io, and game consoles like the Xbox or the Playstation . 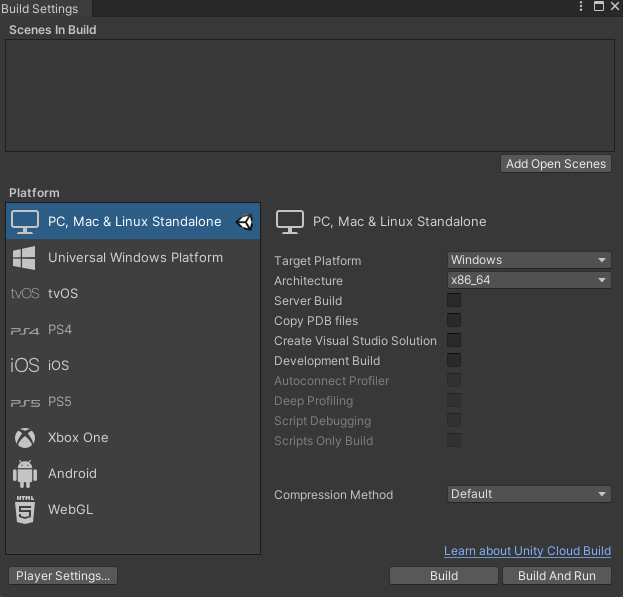 I will use the terms ‘Build Target’ and ‘Platform’ interchangeably on this page.

The empty rectangle at the top is a list of all of the scenes that will be included in the build. If your scene isn’t in this list, Unity will exclude it, and you can’t load it. Unity will also do it’s best to only include necessary assets in your project, and it uses the scene list to figure out what it does and doesn’t need.

Here is a full build scenes list for an actual game: 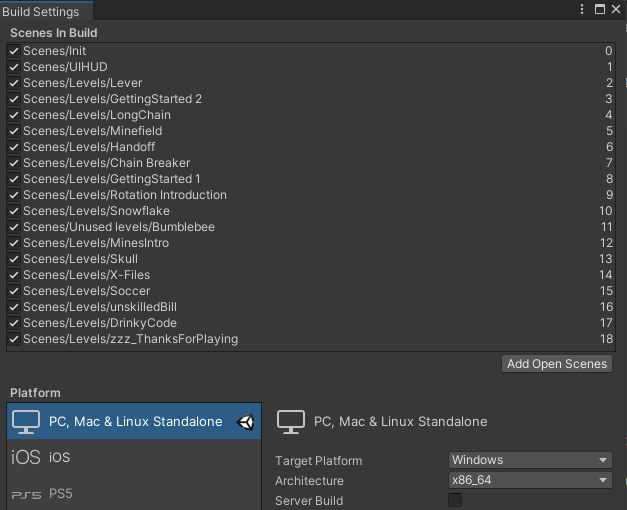 On the right, you can see the ‘build index’ of each scene, and reorder the scenes. The scene at the top of the list - build index 0 - will be the first scene to be loaded when the project launches. After that, it’s up to you to switch scenes and do what you need to do to play the game.

Unity can load multiple scenes at a time. In the above example, the game first loads the “init” scene, which is a small scene that is in charge of loading all of the other scenes. This game has no main menu, the Init scene simply additively loads the UIHUD scene and the first scene of the game. At the end of each level, it unloads the level and loads the next one.

This empty “init” manager scene is a common design pattern in Unity development.

Unity needs to know what platform it is targeting while working internally. While you can build to multiple platforms, and switch at any time, the currently selected build target will determine how Unity imports assets. For example, Windows builds, Unity internally converts audio files to a .wav format, while on Android it uses .ogg.

When you switch targets, Unity will need to reimport every single asset in your project. For large projects, this can take a long time. It’s generally always best to have the appropriate build target selected, and switch to it early on in development.

You can always test your app in play mode no matter what your build target is.

You switch from the Build Settings menu, simply select the appropriate target and click ‘Switch Platform’

By default, Unity only supports building an executable file for the same operating system it is installed on. This is because they take up a lot of file space, and are often not needed. In order to build for other operating systems (building for windows from a mac computer, or vise-versa), we need to add more build targets.

We add a build target from the Unity Hub. Close any open Unity projects, and go to the Installs section of the Hub. Click the three dots next to the appropriate unity version, and select ‘add modules’.

You can see what build targets are installed via icons in the Hub.

If you don’t know better, choose the “Mono” versions instead of “IL2CPP”. For the curious, you can read more about IL2CPP from the Unity documentation.